Executive Chef Hiroyuki Mimura joined WDI International, Inc. in January 2007, to assist former Executive Chefs Aki Yamamoto and Yoshifumi Shibata with the creation of Taormina Sicilian Cuisine’s Grand and Lunch menus. Chef Hiro has been an integral part of the management team that worked to open the restaurant and to ensure its future success.

Chef Hiro began his career in Tokyo, Japan at Trattoria Marumo where he learned the basics of management and the foundations to creating various Italian dishes. He then moved to Florence, Italy where he worked in various fine dining establishments as a Sous Chef, working directly under the Executive Chefs. In 2004, Chef Hiro competed in La Rotta del Vino Slow Food Contest in Italy where he placed 4th in the Appetizer competition and 1st in the Entree Competition.
In June 2010, Chef Hiro was appointed Executive Chef of Taormina Sicilian Cuisine, drawing upon his vast knowledge and extensive experiences in Italy to create authentic Sicilian dishes. Chef Hiro understands the importance of using local and seasonal ingredients, and is committed to incorporating these kinds of ingredients in his dishes whenever possible. Chef Hiro is fluent in Italian and would be happy to have a conversation with guests about Taormina and his experiences in Italy.

Taormina serves the timeless cuisine of Southern Sicily with contemporary style and flair. Inspired by the authentic flavors of Taormina, a seaside village in Sicily.Executive Chef Hiro Mimura pairs fresh pastas with the highest quality seafoods and meats unspoiled by heavy sauces.... 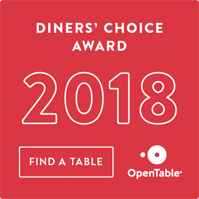 
Come join us at our sister restaurant!